Theatre Tuscaloosa enjoyed hosting the Alabama Community Theatre Festival (ACTFest) November 1-2, 2019. This was the third consecutive year they we’ve worked with the Alabama Conference of Theatre to bring ACTFest to Tuscaloosa. This statewide event featured performances from community theatres from across Alabama.

Love, Loss, and What I Wore, Theatre Tuscaloosa

Best Actor in a Lead Performance

Best Actress in a Lead Performance

Spirit of the Road

An Ongoing Examination of the True Meaning of Life, Auburn Area Community Theatre

ACTFest ’19 was by all measures a very successful festival.  The following report examines the outcomes of the festival in terms of company entries, production quality, adjudicator responses, awards given, educational workshop presentations and participation, performance attendance, overall festival attendance, and participant satisfaction.

The following companies presented the listed shows during ACTFest ’19 in the order listed.

The production quality of the eight show entries was overall very high.  At least seven of the eight shows presented would have been worthy of representing Alabama at SETC on any other given year, and it was remarked regularly that those of us who have attended SETC in the past have seen shows that were not as good as some of the ones that were not selected to move on at this year’s ACTFest.

Overall, adjudicator responses were very positive, and it was mentioned more than once that Alabama’s festival demonstrated an unusually high standard of excellence in the shows that were presented.

While the adjudicators are only required to award Best of Show, Best Direction, Best Actor, and Best Actress, they elected to award many other categories.  This also speaks to the high quality of work presented this year.  The complete listing follows.

Best Actor in a Lead Performance

Greg Vander Wal for “Lennie,” Of Mice and Men, The Actor’s Charitable Theatre

Best Actress in a Lead Performance

Benji Stockton for Of Mice and Men, The Actor’s Charitable Theatre

Benji Stockton for Of Mice and Men, The Actor’s Charitable Theatre

Rebecca Yeager for Of Mice and Men, The Actor’s Charitable Theatre

Spirit of the Road

The following seven workshops were presented during ACTFest ’19.  Overall, participation was very strong.  While specific counts of participation were not captured, an estimate of attendance at each is listed following each workshop below.

Specific house counts between shows were not conducted, however attendance at each performance was quite strong, even at the first two shows on Friday.  The following indicates how many “types” of audience members were eligible to attend each performance.

The annual meeting of the Community Division was conducted during ACTFest.  A spirited election took place for the position of Vice Chair with Casey Kauffman of Self Express Productions running against Joey Lay of The Actor’s Charitable Theatre. In the end, Ms. Kauffman edged out Mr. Lay by 1 vote.  Showing good sportsmanship, Mr. Lay agreed to be part of the planning committee for next year’s event.

During the Community Division meeting on Sunday, a survey was conducted with the following results. Surveys were submitted by 83 respondents. 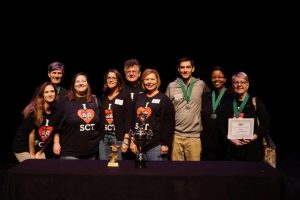 South City Theatre’s Doubt: A Parable earned multiple awards including Best In Show which they shared with Theatre Tuscaloosa’s Last of a Line

THEATRE TUSCALOOSA – The End of a Line

The two Best in Show winners advance to the Southeastern Theatre Conference Community Festival in Mobile, AL March 7-10, 2018 to represent Alabama at this 12 state regional conference.

At the conclusion of ACTFest 18, Alabama Conference of Theatre elections were held, and Theatre Tuscaloosa Managing Director Adam Miller was elected vice chair of ACTFest.  In this capacity, he will contribute to planning and executing ACTFest as vice chair in 2018 and chair in 2019.

The curtain’s come down on ACTFest ’17 ,another Alabama Community Festival and this year’s event was sensational! Seven companies from around our state showcased the best of their work in a celebration of community theatre. Thanks to all who made this event so special and successful. At the top of the list are Kristy Meanor, Carol Heier, Tom Salter and all their wonderful volunteers at the Wetumpka Depot Theatre for hosting us. Your food and beverages and general wonderful Southern Hospitality were so appreciated. Terry Kelly assisted as Festival Vice Chair. Mike Gerrells served admirably as stage manager while Sharon Burum from Oklahoma led us through the festival process as our A

ACT Festival Commissioner. Our kind, articulate and insightful adjudicators: Kimberly Frick Welker, Alan Litsey, and Tom Booth provided excellent feedback to all the productions. But it was our participating companies that made this festival one of the strongest Alabama’s had in years. Thank you to all who took part. ACT hopes it was a memorable and meaningful experience for each of you!

Now on to the awards…

The winners of the Alabama state festival advance to regionals at the Southeastern Theatre Conference (SETC) in Lexington, KY, March 2017. To help with travel expenses,  ACT awards a stipend the Alabama productions advancing to SETC. Two productions from SETC will advance to the national festival, AACTFest ’17, in Rochester, Minnesota, June 2017. SETC offers a stipend to its winners to help with the expenses of traveling to the national festival.

ACTFest 2015-16 was held October 24, 2015 at the Whole Backstage Theatre in Guntersville. The festival was led by Festival Chair Mary Anne Garret and Vice-Chair Sue Ellen Gerrells.

Congratulations to the following for their awards at ACTFest’16.

ACTFest  2014-15 was held October 24-26, 2014 at the Whole Backstage Theatre in Guntersville. The festival was led by Festival Chair Kristy Meanor and Vice Chair Mary Anne Garrett.

Congratulations to the following for their awards at ACTFest’15. What an awesome weekend of theatre!!!!

ACT congratulates this year’s winners for their talent, dedication, and commitment! Led by Festival Chair Cliff Keen, Jr. and Vice Chair Kristy Meanor, this year’s festival drew entries from across the state to witness four shows and participate in workshops and parties.

Given to the company that demonstrates the most professionalism and cooperation during the rehearsal, load-in and load-out. The Spirit award is chosen by the backstage crew, led this year by Stage Manager Mike Gerrells (South City Theatre) and Technical Director Tom Salter (Wetumpka Depot Theatre).

BEST IN SHOW — Advancing to SETC in March, 2014 to represent Alabama:

The Alabama Conference of Theatre (ACT) will hold its annual Community Theatre Festival (ACTFest 2013-14) on October 25, 26 and 27, 2013 at the Wetumpka Depot Theatre, Wetumpka, AL.  Productions will be adjudicated and awards given to acknowledge exceptional theatrical work in a variety of areas both on and off stage!

Note that competition performance times are APPROXIMATE and will depend on the actual running times of the shows and their adjudication; therefore, companies should be prepared to begin earlier or later than times scheduled.

All workshops will be held in the Wetumpka Depot Lobby.

9:00-10:30  Workshop One: Stephen Krempansky, Proprietor of MASSKUS Productions, a performing arts administrative and production service, in Knoxville, TN offers
BEYOND THE BOX OFFICE – Methods to increase revenue and engagement. We will explore partnerships, sponsorships, underwriting and other strategic methods to develop new revenue streams, put butts in the seats and make friends.

10:30-12:00 Workshop Two: Brenda Caradine
RAISING AWARENESS IN YOUR COMMUNITY
The founder of the Tennessee Williams’ Tribute (Mississippi’s Williams’ Festival) discusses past festival events and the ups and downs of making a community aware and involved in a festival for America’s greatest playwright.

1:00-2:00 DIRECTORS PANEL DISCUSSION — All invited–Lobby. Sue Ellen Gerrells, ACT Executive Director and director of “Sylvia”, one of last year’s winning productions, leads a panel discussion with festival directors (both past and present) about their process.

2:00-3:20 Workshop Three: Fulton Burns, Director of Acting and Performance, University of South Alabama
ACTING THROUGH THE EXPRESSIVE ACTOR METHOD
The Expressive Actor Workshop gives the actor the tools to create an Expressive Action, which is action of thought and feeling through integrated voice and movement. Through the usage of the Expressive Action the performer is able to play and embody any piece of text with a variety of approaches to unlock any walls facing a performer. Come play and have fun with this exciting technique created by Michael Lugering.

After completing two days full days and nights of enlightening workshops, inspiring and entertaining performances, after glow parties, a silent auction, a children’s theatre competition, and a brief divisional meeting, participants at ACTFest ’13, Alabama’s  2012 Community Festival, agreed the event was a smashing success and one of the smoothest festivals ever!

The Wetumpka Depot Players were warm and gracious hosts with their excellent facility  Many folks reported that the workshop idea exchanges and performances were highlights of the festival, encouraging them to raise the bar at their own theatres.

AWARDS: Two productions were chosen “Best in Show” and will  represent Alabama at the Southeastern Theatre Conference in Louisville, KY  March, 2013 during AACTFest ’13.

Should one of those two shows not be able to represent,  the alternate production will represent Alabama: “William the Bard,” Park Players, directed by Clay Boyce

Mark your calendars now for October, 2013 and plan to participate in our next community festival! Watch ACT’s website for dates and details.

The dust has settled; the lights have dimmed, and the reviews are in. Alabama winds up another successful Fall Festival! From workshops to the Silent Auction to the talent competition to productions, this event fostered a learning experience for all involved and created network opportunities for those who participated. Thanks to Kevin and Mary Ann Garrett, John and Susan Chain, Mike Gerrells, Terry Kelley, Bill Richardson, Karen Black, David Bailor, and all the community theatre participants who supported our festival in so many ways.